Fun fact:  If you say you don't like something CW has made, he'll declare "THERE'S NO ACCOUNTING FOR TASTE" and then he'll rant for a while about your poor upbringing.   His blue cheese on steak was repulsive - to me at least - so I guess my parents were horrible. 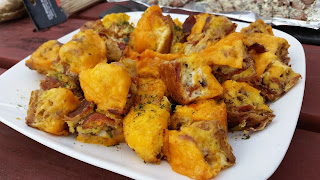 Meanwhile Mathieu (the new guy) impressed us once again with his baked egg-omelette thing loaded with bacon.  It was really good.

The other new guy - Greg - arrived late, with a salad which he did not share.

Steve decided to mix a white and a red sauce for his balls - turned them pink.  They were good, but sort of off-putting.


Someone (Jesus?) brought a layered dip and some corn chips - that was popular.

Some nice (cheeseless) beef options, including some left over roast beef from Tom. 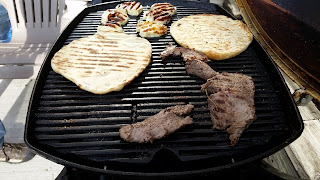 JH's grilled naan and halloum was well received as always.

Someone brought apple pie.  Pie is a very difficult thing at Meat Thursday... no plates or forks are available.  The pie looked good, but I didn't have any.

Vaz brought his mom's pork thing with a white sauce of some kind.  People seemed to like it.  I meant to try it but I got full.  Mostly I was eating cubes of cheddar that I assume Dan brought.

Oh, yeah - Meat Thursday has a website. Also, we're all getting bum cancer.


Sorry about the brief three year delay with updates here.  We're getting back on the horse - and we will be keeping you up to date.

Last week the WHO made a big splash by putting meat in the same category as asbestos and tobacco among carcinogens. The report was the result of a systematic review. This is a process where the authors compile data from several studies to see a "big picture". Generally this process works to eliminate the weird results and highlight common results across studies.

The media jumped all over this - and didn't really bother to read the details. Lots of grossly irresponsible reporting - which is sadly becoming the norm these days as content is more valued for its "clicks and views" than its quality.

The WHO was careful to point out that while processed meat and asbestos share a cancer risk classification, it does NOT mean that they are all equally dangerous. These categories are about the strength of the evidence linking a risk factor to cancer - they don't relate to risk severity.

I encourage you to read the WHO's answers to frequently asked questions about their recent findings. They've actually done a nice job at communications here - it's a shame so many people in the mainstream media didn't take advantage of the information they made available.
Posted by Gregg Senechal at 13:01 No comments: